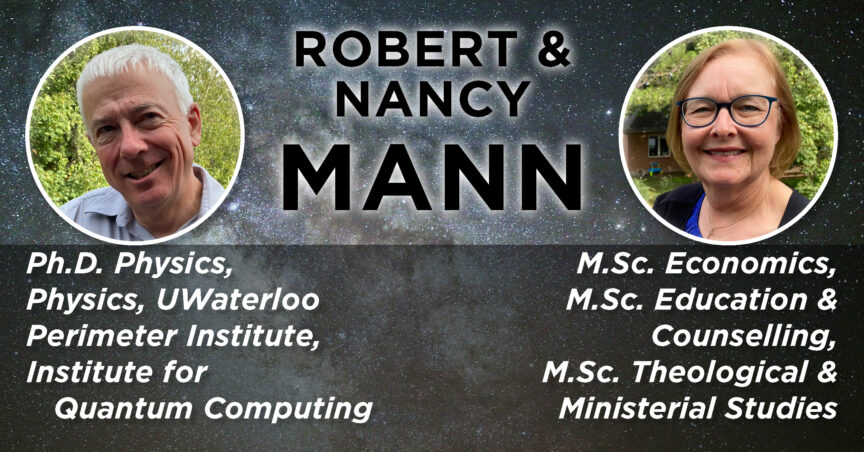 Robert & Nancy Mann
"Addressing the Elephant in the Room: Can Faith & Science Co-Exist?"

Addressing the Elephant in the Room: Can Faith and Science Co-Exist?

The short answer is yes, but not always easily. Scientists and theologians often speak from different worldviews, making it difficult for them to understand each other. Reflecting on our own marriage – one between a pastor and a scientist – we will discuss how the union of faith and science is somewhat like a marriage between two people. At its best, a higher level of harmony and understanding can be attained through conversation and dialogue. However, this ideal is not always realized. We will discuss the personal and professional challenges that arise for each of the partners in this union.

Nancy Mann has a B.Sc. and M.Sc. in Economics from McMaster University; she also has an M.Sc. in Adult Education and Counselling from the University of Toronto and an M.Sc. in Theological and Ministerial Studies from the University of Waterloo—Conrad Grebel College. Nancy has worked in pastoral ministry for many years. She has served as the Associate Pastor at Floradale Mennonite Church, she has also served as a pastor at Waterloo-Kitchener United Mennonite Church and as a pastoral care coordinator at Nithview Community. Earlier in her career, Nancy worked as a counsellor at the University of Waterloo, where she worked for 16 years. Nancy is currently retired.

Robert B. Mann has a B.Sc. in physics from McMaster University and an M.Sc. and Ph.D. from the University of Toronto, and he was a postdoctoral fellow at Harvard University. Currently a Professor of Physics at the University of Waterloo, he has been a visiting professor at Harvard and Cambridge Universities. At Waterloo, he works on gravitation, quantum physics, and the overlap between these two subjects. He is interested in questions that provide us with information about the foundations of physics, particularly those that could be tested by experiment. Author of over 450 papers, he has received several awards, including the 2019 Canadian Association of Physicists (CAP) Medal for Excellence in Teaching Undergraduate Physics, a Fulbright Fellowship, Teaching Excellence awards from the Ontario Undergraduate Student Alliance and from the University of Waterloo, and an Outstanding Referee Award from the American Physical Society. He was chair of the Department of Physics and Astronomy at the University of Waterloo from 2001-2008 and is an Affiliate Member of the Perimeter Institute and the Institute for Quantum Computing. He was president of the CAP (2009-11) and of the CSCA (1996-2005), and served on the Advisory Board of the John Templeton Foundation. His research interests are in black holes, cosmology, particle physics, quantum foundations, quantum information, and the science/religion dialogue.