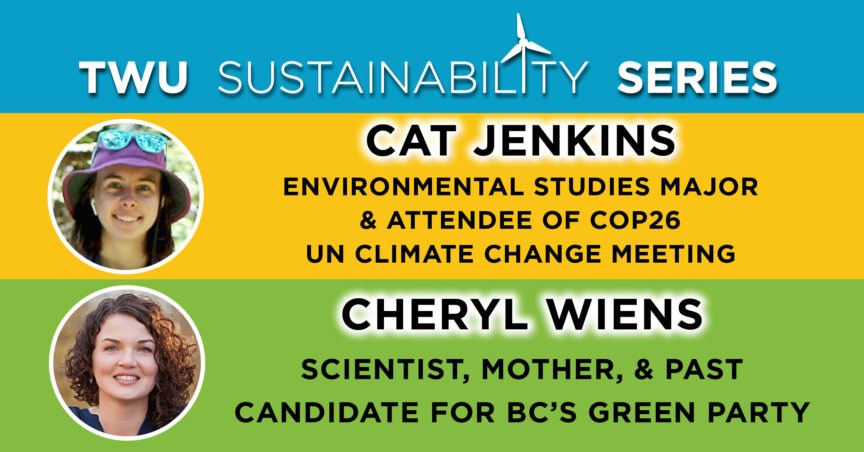 Note: As per BC public health order, vaccination status will be verified at the door for the in-person event and proper face-coverings are required to be worn by all for the entire event, except when actively eating. (Refreshments to be provided.)

When the 19-year old Swedish climate activist Greta Thunberg speaks, people listen. Even those who might be critical of her message and the governments she targets pay attention. Why? Because climate change is not simply a matter of figuring out what the science says – it is a justice issue. The climate change prophets of our time, such as Thunberg, point to predictions and realities of how climate change disproportionately impacts the world’s poor. Yet it is the rich who profit most from the continued extraction and use of fossil fuels, driving the unprecedented increase in greenhouse gasses and accompanying rapid increase in global mean temperatures.

Two local prophetic voices in this call for climate justice will be heard at Trinity Western University Thursday, March 3rd, to kick off a spring series on sustainability. The first speaker, Cat Jenkins attended the 26th United Nations Climate Change Conference of the Parties (COP26) meetings in Glasgow, Scotland in November 2021. There Jenkins took part in a protest led by Greta Thunberg, as well as many other inspiring experiences Cat will be sharing. The second speaker, Cheryl Wiens, has been an active local voice for climate justice, including running for the Green Party in Langley. She will be addressing how personal involvement in the cause – even at a local level – is needed to effect change in politics and lifestyles. Both speakers will highlight their Christian conviction to care for the earth and care for the poor.

Cat Jenkins attended the COP26 United Nations climate change meeting in Scotland in November 2021 as a member of the Christian Climate Observers, an international non-denominational group, “a presence advocating for God’s creation,” “training the next generation of UN climate observers from a Christian and missional perspective.” See http://www.ccopclimate.org/

Cheryl Wiens is actively involved in the Langley community as an advocate for sustainability. She ran as a candidate for the Green Party in the 2020 Provincial election. In her campaign she pushed government representatives to make “evidence-based decisions that will result in a fair economy, a healthy community, and a promising future for everyone who calls Langley home.” Wiens completed her Bachelor’s degree at Trinity Western University and earned a Master’s in Molecular Biology and Biochemistry at Simon Fraser University. In 2019 Cheryl worked with Langley Township councilor Petrina Arnason to draft a climate emergency motion in 2019. After the motion passed, Langley Township worked to create a climate action plan, and Cheryl has continued to be involved, speaking into the plan in various ways and ensuring Langley sticks to the plan.