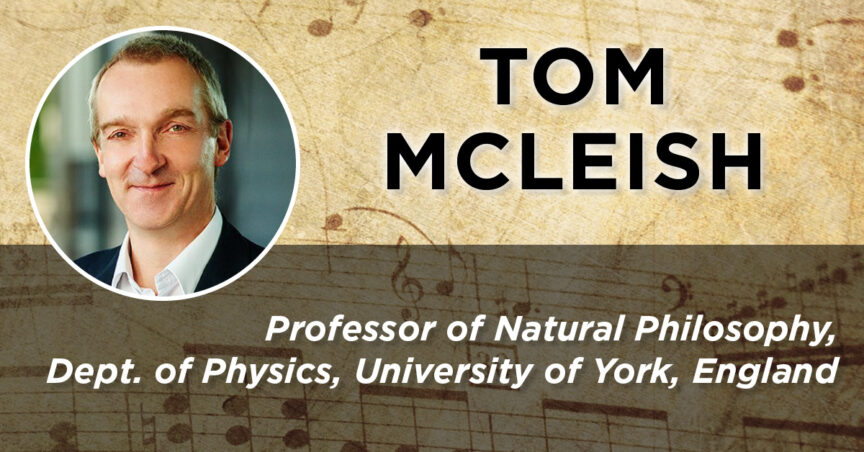 FREE PUBLIC EVENT: Trinity Western University’s Faculty of Natural and Applied Sciences and CSCA’s Vancouver chapter present an online lecture with Tom McLeish (Professor of Natural Philosophy in the Department of Physics at the University of York, England).

The Poetry and Music of Science

“I could not see any place in science for my creativity or imagination,” was the explanation, of a bright school leaver to the author, of why she had abandoned all study of science. Yet as any scientist knows, the imagination is essential to the immense task of re-creating a shared model of nature from the scale of the cosmos, through biological complexity, to the smallest subatomic structures. Encounters like that one inspired a four-year project leading to the OUP book, The Poetry and Music of Science (2019), which takes a journey through the creative process in the arts as well as sciences. The lecture draws attention to the communities within which new ideas and forms arise. We draw on past testimony and also on personal accounts of scientists, artists, mathematicians, writers, and musicians today to explore the commonalities and differences in creation. Tom McLeish finds that the ‘Two Cultures’ division between the arts and the sciences is not after all, the best classification of creative processes, for all creation calls on the power of the imagination within the constraints of form. Instead, the three modes of visual, textual and abstract imagination have woven the stories of the arts and sciences together, but using different tools. As well as panoramic assessments of creativity, calling on ideas from the ancient world, medieval thought and 20th century philosophy and theology, The Poetry and Music of Science illustrates its emerging story by specific close-up explorations of musical, literary, mathematical and scientific creation. The Ars Poetica genre of Henry James Art of the Novel and physiologist William Beveridge’s Art of Scientific Investigation reveal another common narrative plot: the story of human creativity itself. The book concludes by asking how creativity contributes to what it means to be human, drawing on theological ideas of the purpose of creativity and the image of God.

Tom McLeish, FRS, is Professor of Natural Philosophy in the Department of Physics at the University of York, England, and is also affiliated to the University’s Centre for Medieval Studies and Humanities Research Centre. He has conceived and led several radically interdisciplinary research projects, and is a recognized UK expert on formulating and evaluating interdisciplinary research.

His scientific research in ‘soft matter and biological physics,’ draws on collaboration with chemists, engineers, and biologists to study relationships between molecular structure and emergent material properties, recognized by major awards in the USA and Europe. He currently leads the UK ‘Physics of Life’ network, and holds a 5-year personal research fellowship focusing on the physics of protein signaling and the self-assembly of silk fibres. He wrote the short book Soft Matter – A Very Short Introduction (OUP 2020).

Other academic interests include the framing of science, theology, society and history, and the theory of creativity in art and science, leading to the recent books Faith and Wisdom in Science (OUP 2014) and The Poetry and Music of Science (OUP 2019). He co-leads the Ordered Universe project, a large interdisciplinary re-examination of 13th century science. He has also contributed to the philosophy of emergence, and to a research project in cross-curricular education for post-16 pupils.