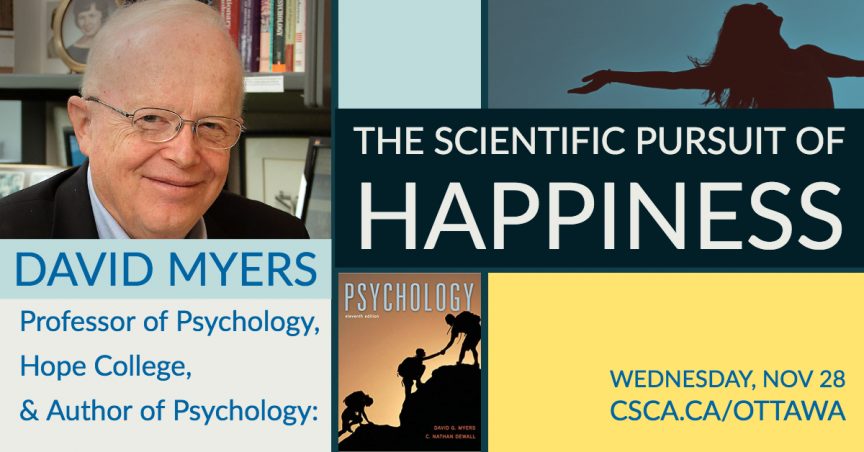 The Scientific Pursuit of Happiness

Hope College social psychologist David Myers will explore the things that do, and surprisingly don’t, predict people’s well-being. Does happiness favor those of a particular age or sex? Does wealth enhance well-being? Does it help to have certain traits? to have close friends or be married? to have an engaged religious faith? New studies explode some myths and reveal the marks of flourishing lives.

David Myers is Professor of Psychology at Hope College in Holland, Michigan. He is a communicator of psychological science to college students and the general public. His scientific writings, supported by National Science Foundation grants and fellowships, have appeared in three dozen academic periodicals, including Science, the American Scientist, the American Psychologist, and Psychological Science. David has written widely on psychological research in many formats, including a number of general interest books and textbooks, which are in use today in psychology classrooms. (source, more info.)

Lydia Laeger is with us live now for CSCA Montreal! Tune in now to hear about Science and Theology as Gifts to the Church. ... See MoreSee Less

When this happens, it's usually because the owner only shared it with a small group of people, changed who can see it or it's been deleted.
View on Facebook
· Share

The CSCA congratulates the American Scientific Affiliation and its new Executive Director Janel Curry. We look forward to our continued close relationship in the years ahead!ASA NEWS:Congratulations to Janel Curry, ASA Fellow! She is the next ASA Executive Director bringing a wealth of expertise both professionally in academia and personally with years dedicated in service to the ASA. We welcome her warmly as we begin this next chapter of transformation for the ASA. ... See MoreSee Less