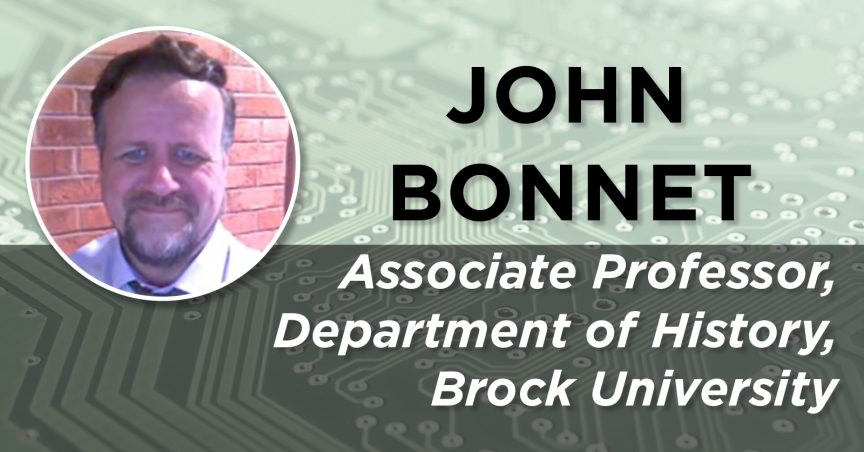 John Bonnet (History, Brock University)
"The Pursuit of History and Beauty by Other Means: Some Thoughts on the Potential for a Digital Theology"

The Pursuit of History and Beauty by Other Means: Some Thoughts on the Potential for a Digital Theology

Most individuals who concern themselves with scholarship and letters tend to have a very narrow conception of the Digital Humanities:  the application of computation to support text analysis. In this line of reasoning, digital humanists are primarily concern with using computing to support tasks such as authorship attribution, linguistic analysis, and key-word-in-context readings of large-scale corpora on topics such as racism.  While this characterization is true, it is becoming increasingly insufficient as humanists have begun to appropriate new and different formalisms besides text into their analysis and practice.  The purpose of this presentation is to argue that the impact of 75 years of digital computation for human practice and thought is now only beginning to become clear.  Computing is now making it possible for communicators to appropriate formalisms that extend beyond the textual and numeric formalisms supported by the printing press.  In my work, I have characterized this development as The Topographic Revolution, the onset of formalisms that are topographic, meaning they have two-, three- and four-dimensions, dynamic, meaning that they move, and are autonomous, meaning they are capable of performing behaviours without the direct intervention of their author or programmer.  This development has supported the development of novel applications, such as agent-based simulations.  It has also presented new opportunities for humanists, including theologians, to reconsider the questions that have long concerned them.  In this talk, I will present two ways in which computation can be leveraged to support scholars who bring a faith commitment to their work in history, theology and the arts.

John Bonnet is an intellectual historian and Tier II Canada Research Chair in Digital Humanities. His research interests include the writings of communication theorist Harold Innis, and the emerging domains of history and computing and humanities and computing.

Bonnett has published contributions in journals ranging from War in History to History and Computing and Literary and Linguistic Computing. He was the principle developer of the 3D Virtual Buildings Project, an initiative that had two purposes. The first was to teach students to generate models of historic settlements using 3D modelling software. The second more fundamental purpose was to develop the critical thinking skills of students by helping them to realize a fundamental point, that historical models need to be distinguished from the objects to which they refer.

Bonnett is currently developing a lab devoted to the emerging medium of Augmented Reality (AR). AR, like Virtual Reality (VR), presents users with computer-generated 3D objects. It differs, however, in where it places those objects.

VR places its objects in artificial environments that users perceive through a computer screen. AR places its objects in a user’s view of real space. For historians, it is a significant development because it suggests the possibility of generating life-size replicas of historic environments and displaying them in an open field, representations ranging from ancient Rome to 18th century Paris to 19th century Ottawa. If historians are to use this emerging medium, they will need to develop and test new conventions for narration, expression and documentation.