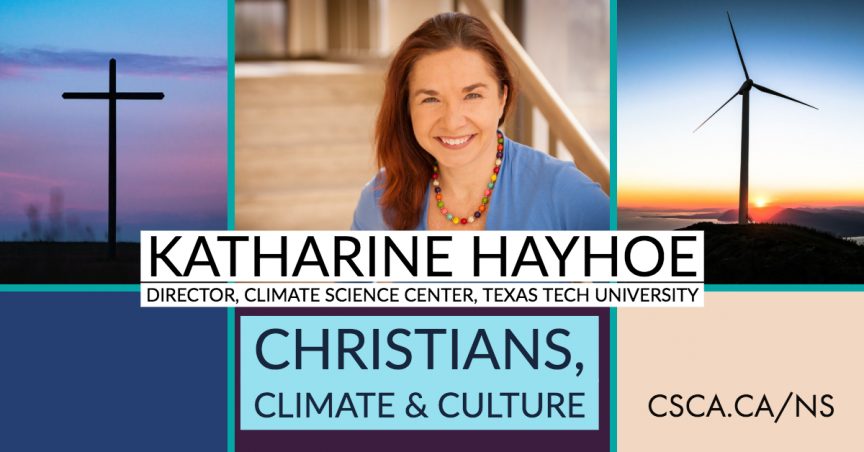 The room is a bit hard to find: at the far back of the building when you come in from the main entrance.

Mounting scientific evidence clearly documents the risks posed by climate change to the poor, the needy, and other vulnerable populations, the very people Christians are called to love. As the scientific evidence builds, however, so does the vocal opposition to this evidence: in Canada, the U.S., Australia and the U.K. Much of the disagreement comes from political and religious conservatives. Why is climate change so polarizing to these communities? What makes it so hard to comprehend and accept? Combining basic tenets of the Christian faith with recent findings from the areas of psychology, sociology, and climate science, I will discuss potential reasons for these disagreements and the role that shared values may play in moving us forward past these barriers.

Originally from Ontario, Katharine Hayhoe is a professor in the Department of Political Science and director of the Climate Science Center at Texas Tech University. She is also the founder and CEO of ATMOS Research, working to bridge the gap between scientists and stakeholders to provide relevant, state-of-the-art information on how climate change will affect our lives to a broad range of non-profit, industry and government clients. One of TIME Magazine’s 100 Most Influential People (2014), Hayhoe works hard to help the evangelical Christian community to understand climate science (e.g. her Global Weirding series on PBS). In 2015, she contributed to a gala event at UBC’s Chan Centre alongside Preston Manning and Peter and Miranda Harris, founders of A Rocha International. In 2016, she joined President Obama on the White House lawn for the launch of Leonardo Dicaprio’s documentary, Before the Flood. She is currently working on a second edition of her book, A Climate For Change: Global Warming Facts for Faith-Based Decisions (forthcoming). (more info)