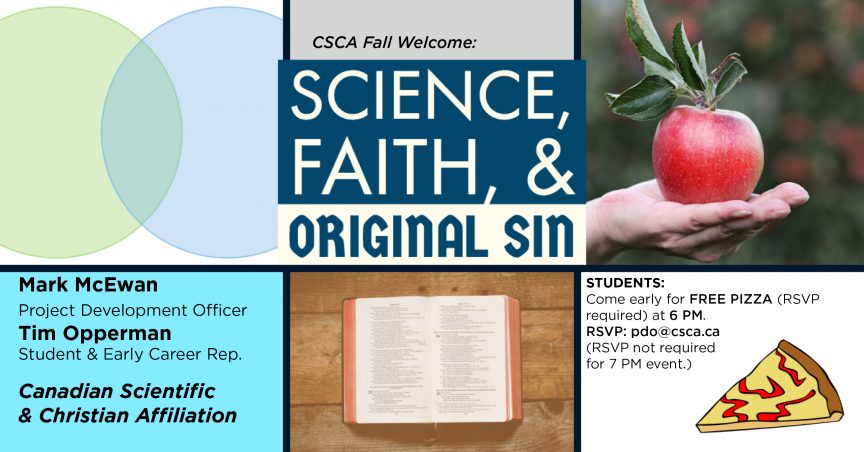 Come early for FREE PIZZA (students only) at 6 PM (RSVP Required). RSVP by emailing pdo@csca.ca. (No RSVP necessary for the main event at 7 PM).

Are science and faith generally in conflict, or can we faithfully relate them? What about specific difficulties, such as reconciling modern biology with the Bible? Join the Canadian Scientific and Christian Affiliation (CSCA) for a special evening of science-faith discussion. Mark McEwan (Project Development Officer, CSCA) will briefly consider the usual ways of understanding the science-religion relationship, responding with an approach for relating science and theology without letting one displace, or replace, the other. He will contrast boundary violations between science and theology with mutually beneficial, asymmetrical partnership. Tim Opperman (Student & Early Career Rep., CSCA) will follow up by focussing on a specific science-faith issue, looking at evolutionary understandings of morality and a biblical understanding of sin. A joint Q&A discussion session will follow.

Mark McEwan (Masters of Theological Studies (cand.), ACTS Seminaries) lives in Surrey, BC with his wife, Krystal. He is the Project Development Officer for the CSCA’s “Local Chapters Project” (2016-2018).  His office is at Trinity Western University, where he is working to complete a Master’s degree in Theological Studies. He occasionally works at TWU as an sessional instructor for a science and religion seminar, and he sometimes teaches classes in the areas of apologetics and Christianity & culture. In addition to being a certified Electrician, Mark is qualified to teach physical sciences and mathematics at the secondary level. His academic interests include epistemology, philosophy, apologetics, and the fruitful interaction of science and theology. He feels especially called to serve Christ by encouraging responsible thinking in matters of theology, science, and especially with respect to interactions between the two.

Timothy Opperman (M.A. Theological Studies, Regent College) is originally from Edmonton, Alberta. It was in the prairies that he developed a passion for science and attended several schools in order to finish his Bachelor of Arts in anthropology at the University of Alberta. After several rounds of international travel, a few stints in Los Angeles, and one too many odd jobs, he moved to Vancouver, B.C. to enjoy the beaches, engage in stimulating conversations, and complete a Master’s of Arts in Theological Studies at Regent College. Timothy has been examining the interaction between science and religion since his early undergrad, with a specific focus on the evolution-creation debate, the evolutionary development of human personhood, bioethics, transhumanism, theological anthropology, and the origins of religious thought.