One does not have to be very familiar with the way in which science & Christianity are engaged on the internet in order to see how polarised the “creation/evolution debate” can get. More heat than light is typically generated as misunderstandings, misrepresentations, dismissals, and accusations are rampant. However, that’s not how it has to be, and space is being carved out in certain times and places for generous conversation.

Last November, I wrote a brief introduction to biologist Darrel Falk’s “Prairie Tour” as he spoke in our Winnipeg, Saskatoon, Edmonton, and Calgary chapters. And now Trinity Western University, where many CSCA Vancouver events are held, has invited both Darrel Falk and Todd Wood to speak in March as part of its Science, Faith, and Human Flourishing: Conversations in Community initiative with Fuller Seminary. 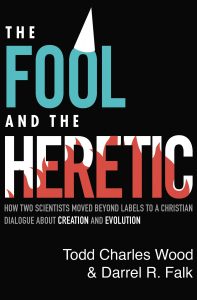 Five years ago, I read young-earth creationist biologist Wood’s blog post in which he introduced a conversation he and Darrel Falk had taken up, discussing their differences with the facilitation of the Colossian Forum. About a year later he wrote more on this, and Darrell Falk noted in his response — an evolutionary creationist writing on a young-earth creationist’s blog! — that they’d been holding weekly hour-long Skype calls for two years. This conversation they regarded as their “Christian responsibility…to grow in [their] understanding of the other.” One result of this collaboration is their brand new book The Fool and the Heretic: How Two Scientists Moved beyond Labels to a Dialogue about Creation and Evolution (written with Rob Barrett of the Colossian Forum).

This approach superbly embodies the ethos of CSCA, as we seek to maintain an attitude of respect, civility, and grace, carefully listening to opposing voices while still clearly arguing for one’s own position. 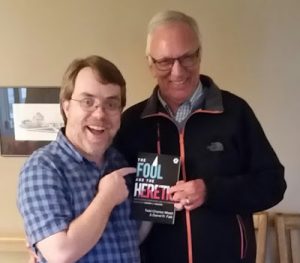 The three public events on March 6 & 7 are as follows:

Details of the events are provided below. The main target audience of these events is the TWU student body, but the public is welcome to attend as well.

Darrel Falk & Todd Wood
"The Fool, the Heretic, and the God Whose Standard is Love"