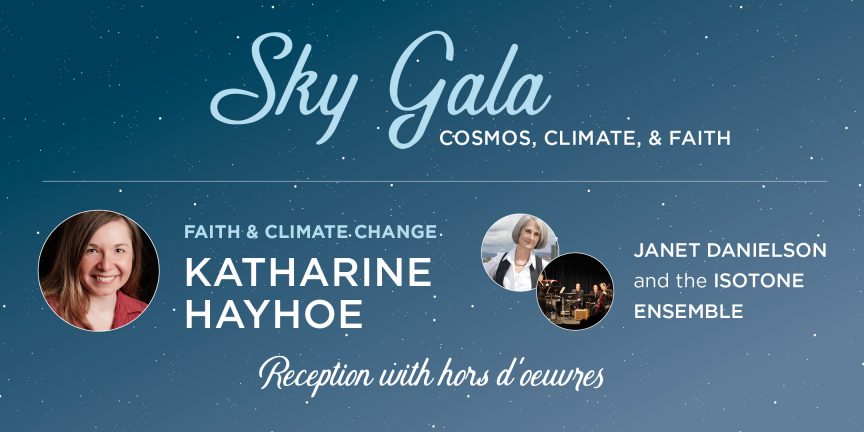 Christians, Climate Science and Our Culture

Mounting scientific evidence clearly documents the risks posed by climate change to the poor, the needy, and other vulnerable populations, the very people Christians are called to love. As the scientific evidence builds, however, so does the vocal opposition to this evidence: in Canada, the U.S., Australia and the U.K. Much of the disagreement comes from political and religious conservatives. Why is climate change so polarizing to these communities? What makes it so hard to comprehend and accept? Combining basic tenets of the Christian faith with recent findings from the areas of psychology, sociology, and climate science, I will discuss potential reasons for these disagreements and the role that shared values may play in moving us forward past these barriers.

Originally from Ontario, Katharine Hayhoe is a professor in the Department of Political Science and director of the Climate Science Center at Texas Tech University. She is also the founder and CEO of ATMOS Research, working to bridge the gap between scientists and stakeholders to provide relevant, state-of-the-art information on how climate change will affect our lives to a broad range of non-profit, industry and government clients. One of TIME Magazine’s 100 Most Influential People (2014), Hayhoe works hard to help the evangelical Christian community to understand climate science (e.g. her Global Weirding series on PBS). In 2015, she contributed to a gala event at UBC’s Chan Centre alongside Preston Manning and Peter and Miranda Harris, founders of A Rocha International. In 2016, she joined President Obama on the White House lawn for the launch of Leonardo Dicaprio’s documentary, Before the Flood. She is currently working on a second edition of her book, A Climate For Change: Global Warming Facts for Faith-Based Decisions (forthcoming). (source, more info)

“Six Pieces of a Reverberant Cosmos”

Danielson was commissioned to write this work for the Isotone Ensemble from Oak Ridge, Tennessee. Composed specifically to accompany her husband’s Book of the Cosmos, it is based on six important scientific discoveries and incorporates some decades of research into the use of sound as a model of physical processes. A movement on spectroscopy, Steel, Clay, and Light, for example, translates the frequencies of light taken from NASA spectrographic graphs into pitches. Another movement references physicist Richard Feynman’s famous bongo playing. The work was premiered in Oak Ridge and subsequently performed in New York’s Symphony Space with an additional percussion player. It will be featured in CSCA’s Sky Gala evening.

Janet Danielson is a composer and music theorist. She has composed for most genres including an opera, The Marvelous History of Mariken of Nimmigen, and orchestrated her work for the Orchid Ensemble and chorus, In the Very Highest Place. She has developed an online Music Fundamentals course, twice nominated for national awards, as well as a text, Basic Organization of Music. She has published articles on women and music, music and the history of technology, and the harmonic basis of linear perspective.
(source, more info)

If my friend/family member is attending the CSCA conference, can I sit with them?

Yes, they can save some spots (within reason) when they enter early.

Are there ID or minimum age requirements to enter the event?

No. But bear in mind that this event does not have small children in mind.

What are my transportation/parking options for getting to and from the event?

There is free parking on-site. Chandos Pattison Auditorium is a 3-minute drive from Highway 1 or 17, and a 5-minute walk from a reasonably well-served Translink bus stop. CSCA will be providing free bus service for conference attendees between TWU (main conference site) and the gala.

What can I bring into the event?

No food is allowed in the seating area, but water bottles are permitted.

How can I contact the organizer with any questions?