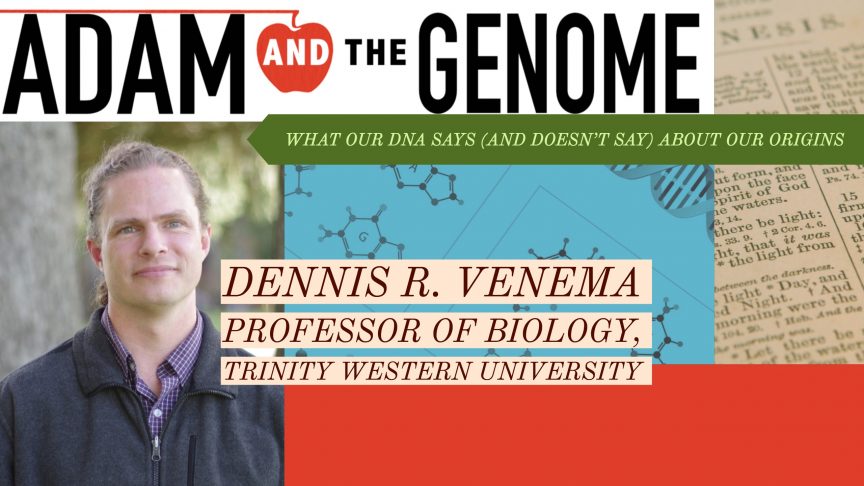 FREE PUBLIC EVENT: Dennis Venema (Professor of Biology, Trinity Western University) will give a lecture concerning his recent book, Adam and the Genome, which he co-authored with New Testament scholar Scot McKnight.

Dennis Venema (Professor of Biology, TWU)
"Adam and the Genome: What Our DNA Says (and Doesn't Say) about Our Origins"

Many Christians believe that humans are direct, supernatural creations who did not result from an evolutionary process. Additionally, many Christians hold that all humans today descend uniquely from a single ancestral couple: Adam and Eve. These strongly-held convictions are now under pressure, namely from genomics evidence that indicates humans evolved and descend from a large population, rather than from a single pair. Is it possible that God used evolution as a means of creation? Or should Christians resist this evidence? What about intelligent design? This talk will explore the genomics evidence and consider its implications for evangelical faith and witness.

Dennis R. Venema (Ph.D. University of British Columbia) is Professor of Biology at Trinity Western University and past Fellow of Biology for the BioLogos Foundation. He is co-author, with Scot McKnight, of Adam and the Genome: Reading Scripture After Genetic Science (Brazos, 2017). His research focuses on the genetics of pattern formation using the common fruit fly, Drosophila melanogaster. He also writes and speaks widely on the intersection of evolutionary biology and Christian faith.