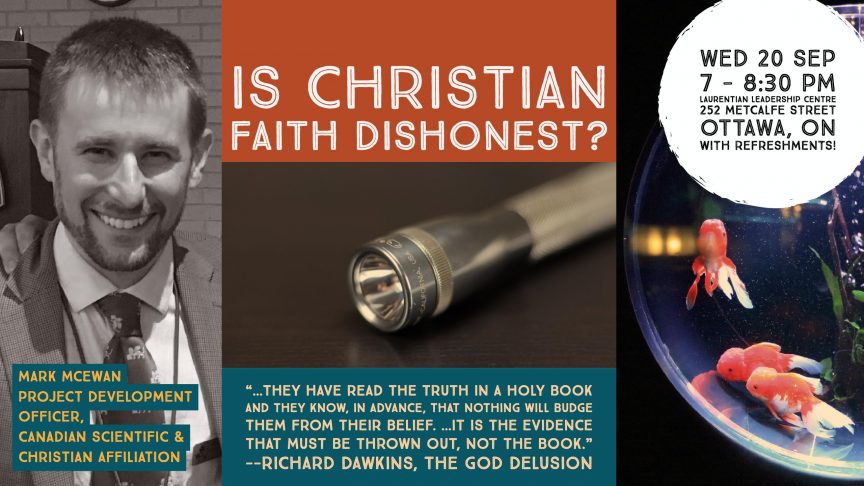 ABSTRACT: In light of modern science, atheists like Richard Dawkins accuse Christianity of being dishonest. Instead of looking at evidence, he says, religious people already have their conclusions “in advance” from a “holy book,” and any new evidence will always be automatically dismissed. Is Dawkins’s objection valid? Is there something intellectually dishonest about Christian faith? This talk answers Dawkins by explaining how we can be intellectually honest toward both God and scientific inquiry. Scientists are always aware that they could be wrong about the natural world in some way, so they always pay attention to new evidence from the world. And just as science self-critically attends to the physical world, theology self-critically attends to the divine Word. Notice that neither science nor theology can get anywhere if it becomes skeptical about the existence of its own “object” of study. So Christian faith is no more dishonest about God than science is dishonest about the existence of the universe. Each enterprise simply finds itself encountered by its “object” and is self-critical in view of that object.

Mark McEwan lives in Surrey, BC with his wife, Krystal. He is the Project Development Officer for the CSCA’s “Local Chapters Project.”  His office is at Trinity Western University, where he is working to complete a Master’s degree in Theological Studies. He occasionally works at TWU as an sessional instructor for a science and religion seminar, and he occasionally teaches classes in the areas of apologetics and Christianity & culture. In addition to being a certified Electrician, Mark is qualified to teach physical sciences and mathematics at the secondary level. His academic interests include epistemology, philosophy, apologetics, and the fruitful interaction of science and theology. He feels especially called to serve Christ by encouraging responsible thinking in matters of theology, science, and especially with respect to interactions between the two.