CANADIAN SCIENTIFIC & CHRISTIAN AFFILIATION
Barrigar at U of A: God’s Agape/Probability Design - The Canadian Scientific and Christian Affiliation 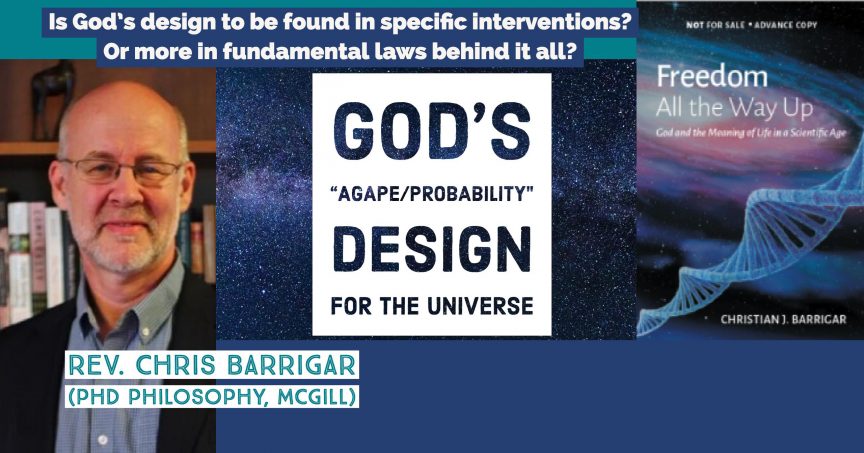 “God’s Agape/Probability Design for the Universe”

Is God’s design in nature evident from specific biological interventions to bring about humanity? Or is it best to see God at work in the fundamental physics, chemistry, laws, and mathematics behind it all? Come join us for a talk by Chris Barrigar (Ph.D. Philosophy, McGill) based on his recent book, Freedom All The Way Up: God and the Meaning of Life in a Scientific Age. Barrigar finds that traditional accounts of design don’t pay enough attention to why God would create a universe with things like randomness, probabilistic physics, thermodynamics, and massively-large numbers (such as numbers of stars or neurons). These things are central to God’s great ‘freedom system’, providing a blend of regularities, laws, probabilities, and randomness ‘all the way up’. This is what makes it possible, Chris suggests, for humans to choose, or reject, lives of agape-love toward God and others.

Chris Barrigar is Pastor of St. Peter’s Anglican Church, Montréal. He has a Bachelor’s degree and two Master’s degrees from the University of Toronto, covering a range of fields in the humanities and social sciences, with some maths in there too; and he has a PhD in philosophy from McGill University. Prior to pastoring Chris taught and/or supervised at the graduate level for a number of Canadian, Indian, and British institutions. He is a member of the Canadian Society of Christian Philosophers, and the Canadian Society for the History and Philosophy of Science, and the CSCA–actively serving at our local chapter in Montréal. Chris also serves as Convenor of the Christian Faculty Fellowship at McGill University.

This lecture focuses on Chapter 2 of Barrigar’s new book, Freedom All The Way Up: God and the Meaning of Life in a Scientific Age, giving a new account of God’s design-strategy for creation. Chris contends that traditional accounts give inadequate attention to why God would create a universe with such features as randomness, probabilistic physics, thermodynamics, and massively-large numbers (such as stars and neurons): these are not accidental side-effects of God’s creative work, but rather they are central to God’s creative strategy. In effect, God’s design lies not in specific biological interventions to bring about humanity, but in the fundamental physics, chemistry, laws, and mathematics at the launch of the Universe(s). These fundamental elements of creation were designed by God to bring about the asymptotically-inevitable emergence in the universe of agape-capable beings—beings with the neurophysiological capacity (including free will) to live out Jesus’ two great commandments: to love both God and neighbors with self-giving agape-love. This is to say, God has designed the universe(s) as a great ‘freedom system’, with a blend of regularities, laws, probabilities, and randomness ‘all the way up’, from the Big Bang to the evolutionary emergence of ‘big brains’, to ensure the eventual emergence of beings with sufficient capacity and freedom to choose, or reject, lives of agape-love towards God and others. This argument employs such disciplines as statistical mechanics, probability theory, evolutionary psychology, and neuroscience in the service of understanding God’s agapic purposes and creative strategy for our universe.