Abstract: Many scientists claim that ultimately everything that happens in the universe can be reduced to the laws of physics. This view has strong philosophical implications, as it leads to reductionism and materialism. This talk will present a criticism of this view and will argue that reductionism cannot even be fully done within physics itself, and even less when going to more complex objects such as biological cells and brains. There is strong evidence for top-down causation, which means that higher-level complex objects have a true causal influence on lower-level entities. In particular, all this leaves a lot of room for human agency as well as for God’s agency in the world. 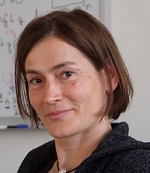 Barbara Drossel is professor of Theoretical Physics at Darmstadt University of Technology. She studied Physics at the Technical University of Munich and the Université Louis Pasteur in Strasbourg from 1982 to 1989 and then engaged in doctoral research at the Technical University of Munich under Prof. F. Schwabl. From 1994 to 1996 she worked with Prof. Mehran Kardar at Massachusetts Institute of Technology (Cambridge, MA, USA), on a postdoctoral fellowship from the Deutschen Forschungsgemeinschaft. In 1996 she moved to Manchester University to carry out postdoctoral studies in Condensed Matter Theory before becoming Research Associate in the Department of Condensed Matter Physics at Tel Aviv University (Israel), financed by a Minerva Fellowship (first year) and a Heisenberg Fellowship (second year). Prof. Drossel’s research interests are in the field of complex systems. These include biological systems, such as genetic networks, ecosystems and evolutionary processes, as well as physical systems such as soft materials (gels, polymers), chaos and pattern formation.

Prof. Drossel lectures on science-religion to general audiences. She is a member of the editorial board of the German science-faith journal “Evangelium and Wissenschaft”, edited by the Karl-Heim-Gessellschaft. She is also a member of Christians in Science. (Source)