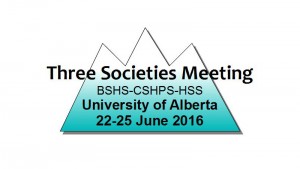 The Three Society Meeting is held every four years and brings together three organizations dedicated to the study history of science, technology, and medicine: the British Society for the History of Science, Canadian Society for the History and Philosophy of Science, and the History of Science Society. Previous successful meetings were in Philadelphia (2012), Oxford (2008), Halifax, Nova Scotia (2004), St Louis (2000), Edinburgh (1996), Toronto (1992), and Manchester (1988). The Eighth Joint Meeting of the BSHS, CSHPS, and the HSS will take place in Edmonton, Alberta, Canada 22-25 June 2016.  The theme of the meeting is ‘Transitions’. (Source)

The CSCA is not necessarily involved with directly sponsoring or presenting events listed as &quotRelated." In many cases, there may not be any affiliation between the parties involved and the CSCA whatsoever. These events are tracked-down and promoted on the CSCA site as a courtesy to our readers, in line with our purpose to encourage growth in understanding between science and the Christian faith in Canada. Even when the events listed do not have any explicit religious component, it is hoped that Christians will be encouraged to attend and participate.