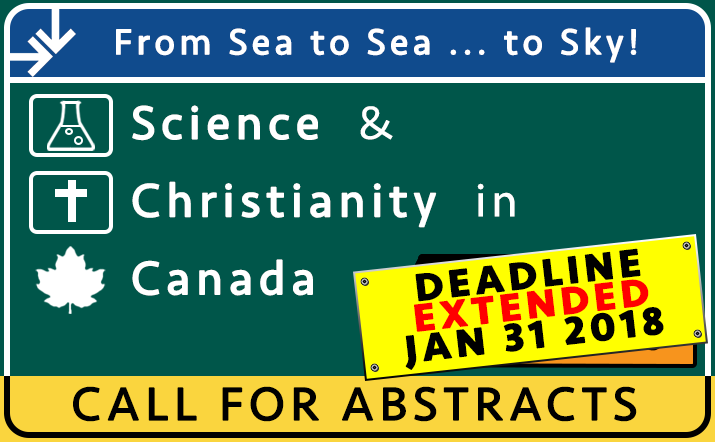 The Canadian Scientific and Christian Affiliation invites submissions of abstracts for our upcoming May 2018 conference, “From Sea to Sea … to Sky! Science and Christianity in Canada.” It will be held at and co-hosted by Trinity Western University in Langley, BC (near Vancouver).

The conference is supported by the Templeton World Charity Foundation, Inc., under a grant to the CSCA for our Local Chapters Project.

We welcome papers from scholars and practitioners (Canadians as well as others) working in any area that relates to questions of science and faith, including physics, sociology, chemistry, history, biblical studies, philosophy, apologetics, mathematics, religious studies, health sciences, psychology, economics, biology, theology, literature, environmental science, and political studies. Quality submissions from students, learned laypersons, and independent scholars are also welcome. Submissions should have some interdisciplinary appeal, and can be targeted to either a scholarly or public audience.

Depending on the number and quality of submissions, there will be up to three concurrent sessions. Contributed presentations will be limited to 20 minutes, plus 5 minutes for Q&A.

Submit your abstract of up to 250 words, along with a current CV and references to two recent publications relevant to your presentation, to Mark McEwan (pdo@csca.ca) by January  31, 2018. (Abstracts submitted by December 15, 2017 may receive early approval.) After anonymous peer-review, those chosen to present will be informed no later than the end of February. Co-authored presentations are welcome. Questions can be directed to the Program Chair, Arnold Sikkema: Arnold.Sikkema@twu.ca

Speakers will function according to the ethos of CSCA / ASA concerning respectful dialogue amidst disagreement.

As an organization, the CSCA does not take a position when there is honest disagreement between Christians on an issue. What we are committed to provide is an open, respectful, and welcoming forum for different perspectives on the relationship between Christianity with mainstream science. We believe that this environment is crucial to understanding each other and working toward our best recognition of the truth.

For more information, see “Our Approach” at www.csca.ca/about.