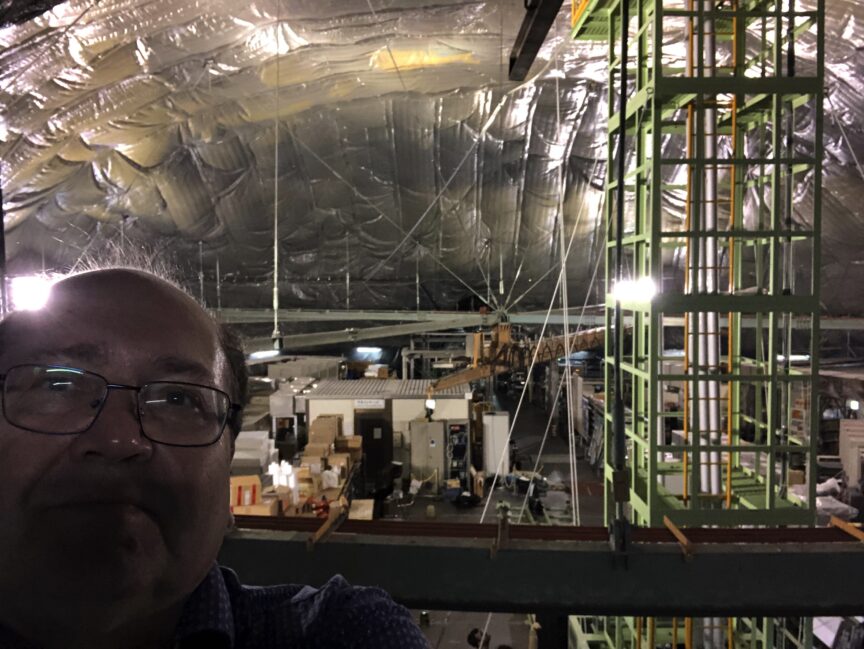 Barry Pointon at the Super-Kamiokande experiment under a mountain in Japan.

For the past 50 years, the Canadian Scientific and Christian Affiliation has facilitated discussions about science and Christian faith in Canada. As part of our 50th-anniversary celebrations, we asked 50 CSCA members to comment on their personal connections to science, scripture, and Canadian scenery. We will share these contributions throughout 2023 in hope that you will find them engaging and encouraging.

1. Why did you choose your scientific discipline?

My scientific discipline is physics, but my first love was Astronomy. I chose to go into physics instead because I believed that I could do something more practical/ helpful to humanity through physics. As well, I felt I could still be involved in astronomy research through my physics training if the opportunity arose.

As it happened, the majority of my physics career has been involved in the training of nuclear medicine technologists, which is rewarding because it is both beneficial to society and interesting. In the last few years, I have been fortunate to also become involved in astroparticle (neutrino) physics research, so I was given the opportunity to follow my scientific heart’s desire.

2. What is one of your favourite Bible verses and why?

One of my favourite parts of scripture is the amazing section of Hebrews 2:9-15. Following the magisterial chapter 1 and the puzzling section on angels (2:1-8), Heb 2: 9-15 provides a distinct perspective on how Jesus conquered the power of death:

The breaking of the bonds of the fear of death is not only a personal comfort but has the power to embolden us to not fear the powers that would seek to stop the work of the church through fear and intimidation.

The power of these verses was revealed to me in a series of lectures given by the great OT scholar, Bruce Waltke, which I will never forget.

3. Which Canadian city or landscape do you love exploring and why?

I will always love Vancouver, for its natural beauty and how it has been the stage on which my life unfolded. I also feel a deep wonder and surprise when crossing the great mountain passes from BC to Alberta. When travelling the Roger’s and Kicking Horse passes, the first unexpected revelations of the Rocky Mountains are breathtaking. In the south, crossing the Crowsnest pass in late summer is awe-inspiring, as the dark, brooding evergreen forests give way to the seemingly unbounded expanse of the swaying, golden wheatfields of the Prairies. These crossings also hold deep, early and late memories of travelling with loved ones.