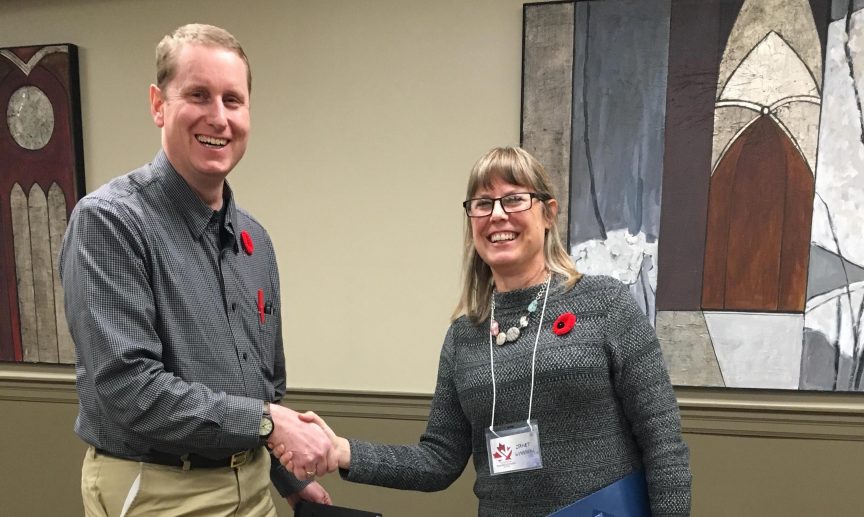 The following is based on my remarks at CSCA’s Annual General Meeting (AGM) on Friday 9 November 2018 held at Redeemer College, immediately after my appointment as CSCA’s new Executive Director was affirmed by the membership.

I would like to thank my friends and colleagues on the Executive Council (EC), and the CSCA membership, for the trust and confidence you are placing in me to hold this office. And thank you to Don McNally, our outgoing Executive Director, who served in that capacity for the past 15 years. I am looking forward to this opportunity to serve and lead this important organisation!

I have richly benefited in many ways from my involvement with the CSCA and the ASA (which I often refer to as our “mother/sister” affiliate organisation) more generally.

I joined CSCA/ASA in about 1996 upon the recommendation of my friend Rick Baartman of TRIUMF; perhaps some of you met him at CSCA’s conference in May at Trinity Western University. I attended, and gave a talk at, the 1999 meeting at John Brown University (Arkansas), and my next formal engagement with CSCA was as Program Co-Chair of the 2008 meeting at George Fox University (Oregon). I was thrust into that role at the recommendation of Robert Mann, my undergraduate mentor and co-author at the University of Waterloo, shortly after I had moved to Trinity Western after eight years at Dordt College, Iowa. That experience was my first realisation that I have some administrative abilities, though I certainly wasn’t interested in seeking out such roles. In the next few years, Judy Toronchuk (who has served on the CSCA’s EC and is currently on the ASA’s EC) tried to recruit me for the CSCA’s EC, but for various reasons I didn’t feel the time was right for that. I did accept an invitation to speak for the CSCA AGM in November 2011, which turned out to be a pretext to appoint me as Vice President; some of you will recall that it took me some convincing. There were two years of serving as VP, moving a little too quickly for my liking into the presidential position in 2013. Since then, it’s been a busy and exciting time, with our 2014 ASA/CSCA Annual Meeting at McMaster, serving as the Project Leader for our three-year Local Chapters Project with funding from Templeton World Charity Foundation, Inc. I was expecting to fade into obscurity as the project concludes and I end my official role with CSCA as Past President from 2016-19. But here we are!

The single greatest benefit I’ve been blessed with through my involvement with the CSCA (and the ASA more generally) is the network of connections across the country and continent. I have been privileged to meet exceptional students, scientists, historians, theologians, philosophers, and pastors. They are engaged with the issues in their discipline, in science and Christianity; they are sincere, curious, motivated, diligent, earnest. They listen, inquire, and challenge, remaining charitable and respectful throughout, demonstrating one of the core aspects of the CSCA/ASA ethos. I’m excited for the growth of our network and for the opportunity for many others to experience the kind of fellowship I’ve been blessed with.

The CSCA offers significant value for our members and a broader community of people interested in science and Christian faith. Primary among these are the networking opportunities afforded by our eleven local chapters from coast to coast. Holding events of various types, including public lectures, film and panel nights, dinners, and book discussions, allow connections to form between scientists, academics, pastors, students, and others. We have a great team in the EC, and wonderful people across the country who are passionate about sharing the vision that we can be persons of deep Christian faith and committed scientists.

Over the coming months, the EC and I will be exploring with the ASA’s staff and EC how we can best move forward collaboratively after three years of our Local Chapters Project, during which time we forged some new paths that were possible only with the support from Templeton. We as affiliate “sub-organisation” of the ASA can and should continue to support and work together, neither of us having to re-invent the wheel. And we as CSCA should continue to explore how CSCA differs from the ASA generally, and how CSCA adds value to ASA for Canadians.

My role as Executive Director is at the pleasure of the EC, and I see my leadership as being with, under, and around the Council, to serve and equip the CSCA. Once again, thank you all! I appreciate your support, and look forward to your ongoing involvement and suggestions.