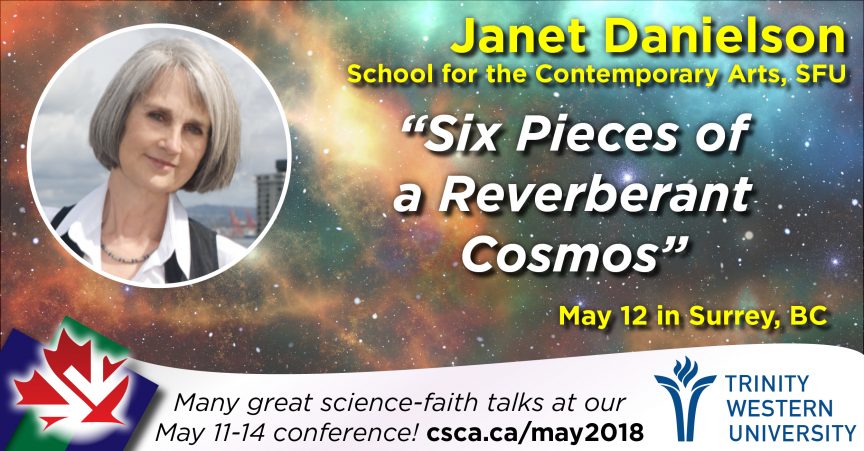 I first met Janet Danielson at a satellite conference of the 2014 Annual Meeting of the ASA/CSCA, entitled Academy Regained. The main conference was held at Hamilton’s McMaster University, and part of the satellite was held “up the mountain” at Redeemer University College. Janet’s talk on “Music as Science and Art” revealed to me the depth and breadth of her awareness of and engagement with the physics of music and the music of physics. She noted how music, like science, brings to light the glory of God. Her deep interest in exploring music as a precise quantitative art showed up in a couple recorded excerpts of her recently created Six Pieces with which the satellite conference dinner was graced.

Ever since then, I’ve been longing to hear Six Pieces of a Reverberant Cosmos in a complete live performance, and the time for this has come! Interspersed with readings by Dennis Danielson from his The Book of the Cosmos: Imagining The Universe From Heraclitus To Hawking (Perseus, 2000), the Six Pieces are exotic interpretations of ancient to modern human writings on the cosmos. The Pieces were composed by Janet Danielson and are played by the Isotone Ensemble from Oak Ridge, Tennessee who have played it at home and in New York before this Canadian Première.

After a reading from Job 38:4-12, the first piece, Proud Waves, its name taken from v. 11, is described by Janet in her notes as follows:

Upon the surging murk of a pre-cosmic existence without time or light, harmony imposes its tranquil order, while rhythm appears in the form of a Richard Feynman bongo solo, setting bounds for the inchoate waves and leading the dancing chorus of the morning stars.

After readings from — and pieces playing upon — Boethius, Digges, Lambert, and Payne-Gaposchkin, Dennis will read an excerpt from a 1993 piece by Harvard-Smithsonian astronomer Owen Gingerich about the amazing process of carbon formation. The sixth piece, Specific Resonances, is then performed, as explained by Janet here:

Carbon, which is necessary for life, can be produced only under exacting conditions. Within the roiling cauldrons of giant red stars, two helium-4 alpha particles sometimes bind to form beryllium-8, whose fleeting existence is only attoseconds (10−18 sec.) long. But with the right specific resonance or level of excitation, a third alpha particle may be able to bind with the ephemeral beryllium to make carbon-12. In this piece, three alpha particles are first heard as four-tone chordal structures which each repeat three times. Then two of them combine in a brief dance, while the third floats by unconnected. The level of excitation increases. Beryllium is presented as crystalline arpeggios, alluding to beryl’s emerald form, during which the third helium-4 reappears and carbon-12, symbolized by a scale line utilizing all twelve tones, emerges from an obscure process. However, this scale is mundane and short-lived, ascending, descending, and then vanishing into the dance of the stars.

Come, be inspired and lifted to the heavens as the Isotones bring the music of the spheres to life as part of Sky Gala!

See the full talk schedule for list of all talks.

The single-day price of $125 is in effect until April 27. Single-day Saturday admission includes all conference sessions that day, as well as breakfast, lunch, and dinner–and it includes admission to our special evening gala with Katharine Hayhoe, live music, and a reception with hors d’oeuvres. Register now

Our special evening “Sky Gala” on May 12 is included with conference admission, but it is also open to the public as a standalone evening event for $30: www.skygala.com