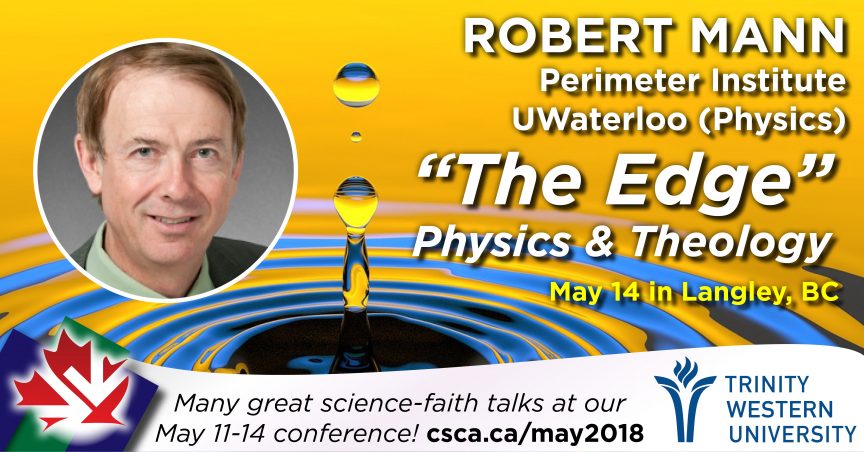 I first met Robert Mann as he was one of my physics professors at the University of Waterloo around 1988. He became my undergraduate mentor, launching me into a career in theoretical physics with our first publication on one-dimensional gravity, a illustrative toy model in which we revised Einstein’s general relativity so it worked in a universe on a line. Fifteen years later, when I started at Trinity Western University, we reconnected due to his leadership of the CSCA and a lecture he gave at TWU on physics and Christianity. Since then, we’ve had opportunity to work together as past presidents of CSCA.

Mann is a prominent, leading, and respected Canadian physicist, having presided over the Canadian Association of Physicists, and heavily involved at the Perimeter Institute (a top international theoretical physics centre) since its inception. A few years ago, Mann Fest was held for his 60th birthday, to which all his co-authors were invited. I am very sorry to have missed it.

Robert Mann is a passionate Christian, an accomplished physicist, and a keen educator. His Monday morning plenary address, The Edge: Physics & Theology, promises indeed to be cutting-edge and stimulating.

Today marks two years since our May 2018 conference, “From Sea to Sea … to Sky! Science and Christianity in Canada.” Pictured here are Arnold Sikkema from our Vancouver chapter and James Drummond of our Nova Scotia one! Our conference recordings are also available today, which may be accessed at www.asa3.org/ASA/resources/index.html (CSCA 2018 button at bottom). We’ve released select video recordings as well at www.csca.ca/YouTube #cscaVan #cscaNov #c2c2sky ... See MoreSee Less

On Friday we held our first ever online-only local chapter event! The recording of "Technology: Progress or Prudence?" with Isaiah Ritzmann is available on our YouTube channel here: youtu.be/vOmgsZ59E6M ... See MoreSee Less