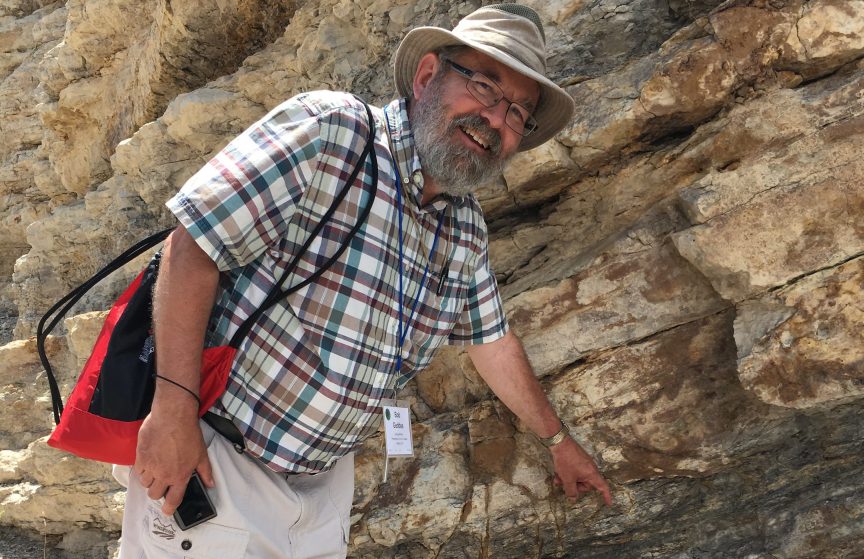 Bob Geddes at Dinosaur Ridge, CO, part of the 2017 Annual Meeting of the American Scientific Affiliation.

Geology, or earth science, as it is now more commonly referred to, is a fascinating topic which has intrigued many people and inspired many Christians. A Canadian scene of a pristine lake set amongst the snow-capped Rocky Mountains is often used to instill a sense of God’s majesty and power. This is very appropriate for people of faith. The geologist looks at the same image and, with the same sense of awe, explores how such a scene has come about. It is not long before the geologist becomes a historian and a detective. The history runs very deep, perhaps a few billion years, and the detective work becomes a rich interplay of chemistry, physics, biology, environmental science, involving speculation, hypothesis, and theory.

For centuries, earth science has also been at the crux of much pondering over science and issues of Christian faith. Most of this stems from the opening chapters of the Bible. Indeed, right “In the beginning” (Gen. 1:1) one is confronted by what has been perceived as a record of how the earth was formed, what the timing was, and how humanity fits into the picture. In broad strokes, there is some compatibility between the step-like nature of the creation story, the progressive nature of the development of life and even the occurrence of humans as revealed by modern science. Areas of such agreement are a good starting point in the science-faith dialogue.

It is in the details, however, that the seeming conflict exists between what the Bible is said to portray and what earth science professes. The “gap” is huge. Geologists overwhelmingly support the contention that the earth itself is about 4.5 billion years old. Many Christians, in support of a literal-historical perspective of Genesis 1, adhere to the principle of Young-Earth Creationism, using their science to portray a world which has been in existence for at most 10,000 years. If these two concepts were rock layers, with the younger sitting on top of the older layer, the boundary would be called an unconformity; in this case, a great unconformity!

There are a substantial number of geologists, however, who would see no unconformity at all. In their world, guided and inspired by both Scripture and science, they have encountered a compatibility that serves to honour the Creator and the Creation in a rich and fulfilling interplay.

In the late 1700s, the Scottish Quaker and physician James Hutton studied the unusual juxtaposition of different rock layers. He is generally credited with some of the earliest pronouncements on the ancient age of our planet. Indeed, it was the observation of one particularly graphic unconformity at a location known as Siccar’s Point on the North Sea that allowed him to speculate on the great age of the earth, and the evidence that materials keep recycling with no appearance of a start.

In Canada, one of the many scientists who helped develop such concepts was Sir J. William Dawson. He was principal of McGill University in Montréal for almost all of the last half of the 19th century. A staunch evangelical Presbyterian and a geologist, he found much comfort in his ability to embrace a very ancient earth as a reflection of God’s omnipotence. He spearheaded the investigation of early life forms. He is the only scientist to have been president of both the American Association for the Advancement of Science and its British counterpart.

One of the intellectual challenges of earth science is wrapping one’s mind around the concept of age. Over the years geologists have developed field and analytical tools for establishing both a relative and absolute time scale. Relative mechanisms include such things as fossils and stratigraphy (the continuity of rock layers), and absolute mechanisms include radiometric dating. This latter method, developed in the early 1900s (advanced and refined significantly since then), makes use of the measurable decay rate of radioactive isotopes. While the principles are too complex to explain here, suffice it to say that the same mechanisms are used every day to give us nuclear power, nuclear medicine, radiation treatment, etc.

Over the past century or two, a variety of ways of allowing for positive interaction between earth science and Christianity have been promoted. Early concepts, some still in popular use, include the Gap Theory, which allows for vast time lapses between the days of Genesis, and the Day-Age Theory, whereupon each day of Creation corresponds to an episode of earth history and accompanying development of life. There are others, and they are all worth pursuing. You may find one that suits your worldview.

Canadians and geology are a good match. Our vast country contains nearly every geological age and environment known to exist. We benefit tremendously from its earth resources and its beauty. It is part of our natural and national ethos. Our earth scientists (many of whom are Christian) are respected around the world. Developing a compatibility between earth science and our faith is part of acknowledging the sovereignty of God and making our planet a better place. 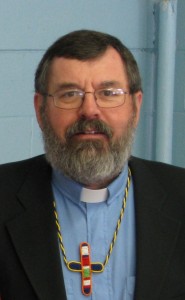 Bob’s first calling was as a geologist, working for fifteen years in mineral exploration in northern Canada and then with the Ontario Geological Survey. He then became a Presbyterian minister, pastoring a congregation on the Hamilton mountain for nearly twenty years. He enjoys exploring science and faith issues by way of nineteenth century Christian geologists such as Canada’s Sir J. William Dawson, and also as manifested in the new science of astrobiology. Bob has faithfully served the CSCA as Secretary/Treasurer since 2008.