This blog post reproduces the full text of our first pamphlet.

What is Quantum Physics?

Quantum physics refers to our current understanding of matter and energy on the small scale of atoms and sub-atomic particles. Developed in the early 20th century, it explains the periodic table of the elements, the stability of matter, and the glow of a hot poker. At its core is the surprising discovery that energy only comes in discrete amounts, or quanta.

In physics, laboratory measurements always come with a degree of uncertainty. For example, we might be able to determine the speed of a baseball as 32±3 m/s, or the vibration frequency of a tiny quartz crystal to within one part in a billion, but not exactly. Improving precision, or reducing uncertainty, is a common goal in experimental physics.

When it comes to quantum theory, uncertainty is taken to a surprising new level. It is not only that our measurements leave room for error in the regular way, but here it is impossible in principle to avoid uncertainty. Even perfect measuring tools would be unable to avoid it. This is Heisenberg’s uncertainty principle: the more precisely one knows where something is, the less precisely one can know how fast it’s moving. The reverse is also true: the more we know about how fast something is traveling, the less we can say about its location. We can never know both (with arbitrary precision) at once.

So if you get a speeding ticket, on which the officer has indicated both your location and speed, that might be worth challenging in court! Jokes aside, although the uncertainty principle does apply to cars, its effects are only noticeable for tiny particles.

Does God know the location and speed of the electron?

But the Christian may ask, What about the omniscience of God? Surely God knows the location and speed of each particle; after all, God knows everything!

Well, not so fast. God indeed knows everything; that is, he knows all that can possibly be known. But is it a limitation on God’s knowledge if he does not know the area of a square circle, or the colour of the number six? Of course not! That’s because these are just category mistakes.

Colour itself is a property that we humans identify with certain objects. Leaving aside the fact that every object above absolute zero temperature emits some electromagnetic radiation (including visible light) at all wavelengths, and leaving aside the fact that colour perception varies by person and by environment, and is even socially influenced, there is no reason to expect that our human concept of colour is something God knows as an absolute truth. God knows what our perceptions are, of course, but his knowledge of creation is not limited to the categories we use to describe our perceptions. We must resist the temptation to think that God’s knowledge is merely a perfected version of our own perceptions and expectations about reality.

It turns out that “location” and “speed” are quite a bit like “colour.” They are human designations which work very well for certain objects at the level of everyday experience. Yes, cars and baseballs are somewhere and have some speed. But location and speed are not so much the objective properties of the objects themselves as they are ways in which we describe them. So we cannot simply assume that the same ought to apply to objects at the microscopic or atomic level with which we do not have everyday experience. Although it may seem pious to claim, against the odds, that God must know the location and speed of each electron, this is actually to limit God’s knowledge and inflate our own: we inflate our own ideas about nature by thinking that our categories (location, speed) are the categories; then, we limit God to these, unwilling to accept that his knowledge of creation might be of a qualitatively different character than our own. There is nothing impious about admitting that God is greater than us. Surely God knows all that can be known, but we err in thinking that “all that can be known” must be determined according to our current perceptions and expectations.

John Polkinghorne, well-known Anglican priest and theoretical physicist, notes in his 2004 book, Science and the Trinity, that the veiled reality of the quantum world “must be encountered on its own terms and in accordance with its Heisenbergian uncertainty…there is no universal epistemology.” That is, there is no one-size-fits-all approach for coming to know everything. For quantum realities, “it would be epistemically disastrous to try to insist on the Newtonian clarity that we can often attain in the macroscopic world of everyday phenomena” (page 77).

It is actually an example of reductionism to think that the numerical features of our world exhaust its physical features. Reductionism is the mistake of thinking that some part of reality can be broken down, simplified, or “reduced” to just one way of measuring or understanding it (e.g. thinking that climate science is just weather, or that persons are nothing but atoms). Supposing that all there is to the electron is a set of numbers referring to location and speed (among other quantities) ignores the fact that the electron is an irreducibly interacting physical thing. Its interactions with light and with other charged particles, for example, make the electron what it is. We would similarly err if we expected that knowing all the physics of a cell settles all we could know about it biologically.

God’s world is full of surprises and curiosities, and our knowledge of it grows when we submit ourselves humbly to its reality without imposing our preconceived categories upon it. 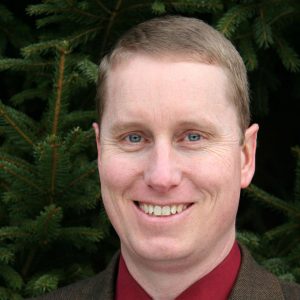 Arnold Sikkema (PhD Physics, UBC) was president of the CSCA from 2013 to 2016. He is a theoretical physicist with background in general relativity and condensed matter theory. His current research interests are in theoretical biophysics and in the Christian philosophy of science, particularly the relationship between physics and biology. Arnold is also Professor of Physics at Trinity Western University in Langley, BC.

Below is a highlight from Arnold’s 2016 National Lecture Tour on this topic. Find the full lecture video here.