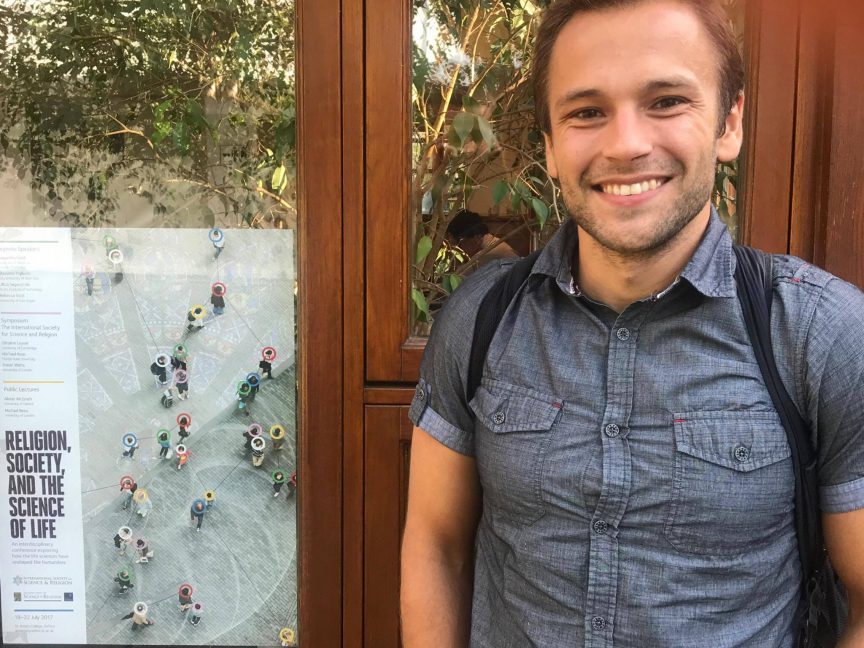 Seth Hart attended “Religion, Society, and the Science of Life,” a conference held at Oxford by the Ian Ramsey Centre for Science & Religion (July 19-22, 2017).

[columnize]While there were many aspects of this conference I could praise, I want to reflect on the particular moments and features that were most enlightening to me in my academic journey on the relationship of science and faith. First, it was very interesting to see the wide range of perspectives present at the conference. Not only were theologians in attendance, but scientists and philosophers of all religious persuasions came as well. This engendered a great amount of disagreement and conversation when various issues were discussed.

One of the most enlightening aspects of the conference was the current nonreligious, even atheistic, critiques levelled at the New Atheist movement. Sam Harris and Richard Dawkins were brought up repeatedly at the conference, and often by non-Christians. Every reference to them, without exception, was critical of their perspective on science and religion. One presenter even gave a paper that suggested the New Atheist movement was akin to a new religion. It was only afterward that I learned that the speaker was, in fact, an atheist himself. Even high-profile atheists spoke scathingly of the movement, such as the philosopher Michael Ruse.

Another major topic of discussion was evolutionary ethics. Could evolutionary science bridge the “is/ought” gap and provide a foundation for normative ethics? Some, like Ruse, favoured this approach. Others, such as the Catholic scholars present, were strongly critical of this possibility. Craig Boyd of St. Louis University, for instance, noted the major theories defending the possibility of evolutionary ethics before systematically critiquing them. It was interesting to note that most of the non-religious scholars failed to give any ontological grounding for their moral claims. I was left wondering if morality was, for them, nothing more than subjective illusions that had evolved for reproductive success.

Alister McGrath’s talk was very encouraging and insightful. He spoke of the current trends in the field of science and religion. Some of the facts and figures he gave were incredibly encouraging. He noted that nearly 50% of theology undergraduates at Oxford are specializing in the field. Not only so, he gave fact after fact demonstrating that the millennial generation (of which I am a member) is finding science insufficient on its own for fulfilling their basic existential needs. He likewise pointed to the areas of the field that are seeing much research and areas that are in need of further development. Non-Christian religions, for instance, have yet to deeply engage in the relationship of their faith to modern science: Christianity, has surpassed the other great faiths in its attempt to integrate the two fields.

Within Christianity, the discussions were far from univocal. I became well acquainted with one recent doctoral graduate from Graduate Theological Seminary. He presented a paper on Niebuhr and original sin. His conclusions dehistoricized the Fall of Man in an attempt to reconcile the doctrine with modern science. While many (such as Peter Enns, Tremper Longman III, and others in the US) have taken similar approaches, this opens up new problems in theodicy that his paper did not address. When I later questioned him on this, his answer was simply that there could be no answer to theodicy. I found this reply wholly unsatisfactory. I have pondered the possibility of pursuing a dissertation on the subject of evolutionary theodicy. This statement, along with the complete lack of engagement with the issue at the conference, highly motivated me to pursue this issue in the future.

In this respect, Oxford has become one place I where will definitely being applying for a doctorate. In addition, I was able to gauge the field and question the experts on which universities would be best for someone interested in the field of science and theology. I came away feeling much better prepared than I had before. While I learned a great amount in my time there, that may be the token of information that is most profitable for my coming years. God willing, I can use what I garnered from this conference to enable me to better fulfill my desire to specialize and contribute in this field.

Thank you for the opportunity to partake in this conference and encouraging students like me to live out their dreams. May God bless you in your efforts and work for His Kingdom.[/columnize]

Seth Hart earned his BA in Biblical Studies at Ozark Christian College (Joplin, Missouri) and an MA in Ministry from Johnson University (Knoxville, Tennessee). He is currently working on a Masters of Theological Studies at Regent College, Vancouver, and he plans to pursue doctorate studies in the field of science and theology.