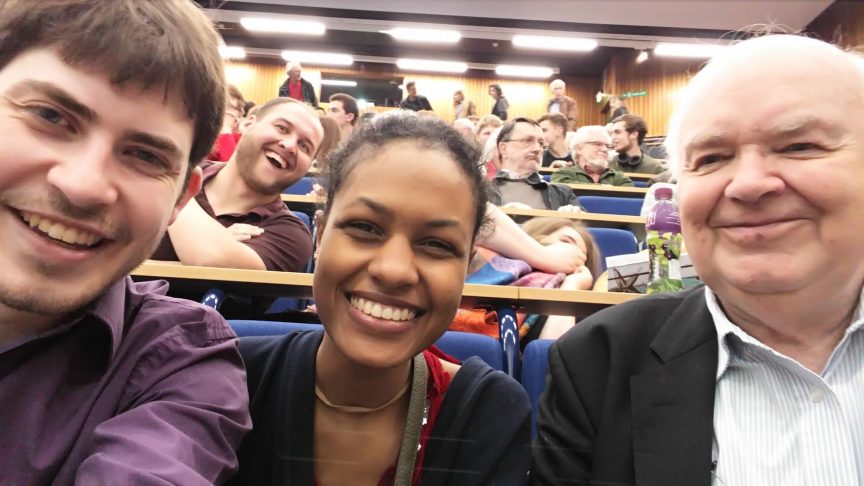 On May 13th, 2017, Andrew Reeves (University of Waterloo, M.Sc. Physics: Astrophysics and Gravitation Candidate) attended “Playing God? Research, Ethics, and Practice in Modern Medicine,” a conference held by Christians in Science (CiS), our UK affiliate. As a part of his trip, he also arranged to attend a series of other events, including two talks by J. Richard Middleton, entitled “Human Distinctiveness and the Origin of Evil in Biblical and Evolutionary Perspective” and “A New Heaven and a New Earth”–as well as talks by Gavin Merrifield and Sir John Lennox.

Thanks to the Canadian Scientific and Christian Affiliation’s student scholarship, I was able to attend a number of talks and a conference in the United Kingdom that focused on the interface between science and the Christian faith. To even briefly summarize these excellent talks and what I learned would impossible to fit here, but I’ll do my best to cover the highlights.

I attended two talks by Professor J. Richard Middleton at the very beginning of my stay, and he brought the ancient texts of the Bible alive in new ways that I hadn’t thought possible. He drew heavily from Genesis during a Faraday Institute research seminar entitled “Human Distinctiveness and the Origin of Evil in Biblical and Evolutionary Perspective,” which left me with many concerns (and questions!) about how much the church has been missing from the text in its squabbles over Young/Old Earth interpretations. The second talk, “A New Heaven and a New Earth,” focused on the other end of the Bible: the book of Revelation. Middleton’s book of the same title is likely an excellent next step for further learning.

I also caught the tail-end of “The Interstellar Church of Tomorrow” by Dr. Gavin Merrifield. This talk raised many questions and concerns regarding fast-approaching realities that once seemed as mere science fiction–including extraterrestrial life and artificial intelligence. Chatting with him after the talk, it was clear how difficult it will be for churches (and others!) to confront these issues, particularly artificial intelligence, in North America and the UK in the coming decades.

Next was a wonderful lecture by Sir John Lennox called “God and Stephen Hawking: Whose Design is it Anyway?” This excellent talk questioned the assumptions/arguments that lead many scientists (e.g. his colleague Stephen Hawking) to conclude that atheism is the most (if not only) logical belief system. He counters this thinking with multiple lines of argument for, at minimum, some kind of God who created all that we see and experience. As always, he was absolutely captivating.

I think there is great potential for engaging Europe’s general public in discussions relating to science, faith, and their overlap. I plan on bringing what I learned from the talks I attended–and from the many interesting conversations I had–to the science/faith dialogue here in Canada.Andrew Reeves

Finally, I attended the CiS 2017 Northern Conference “Playing God? Research, Ethics, and Practice in Modern Medicine.” It was filled with excellent speakers on a range of topics relating to inequality, aging, mental health, and general ethics in medical research and implementation. It was an excellent learning experience for me, as I have dabbled in doing research and programming work in the medical field and would love to engage more capably in tackling these challenging issues.

The whole experience was an incredible whirlwind tour of a diversity of science and faith related topics. Speaking with many people in the UK about their views relating to faith, particularly Christian faith, gave me a better perspective of what the religious climate is like on the other side of the Atlantic. Interestingly, despite the much more secular society/culture in the UK and much of Europe (compared to Canada), I encountered great interest in faith and faith-related issues whenever they came up. As a result, I was able to participate in many excellent and interesting conversations with Christians and non-Christians alike. I think there is great potential for engaging Europe’s general public in discussions relating to science, faith, and their overlap. I plan on bringing what I learned from the talks I attended–and from the many interesting conversations I had–to the science/faith dialogue here in Canada.

Thank you CSCA for this phenomenal learning experience!

Originally from P.E.I., Andrew earned his B.Sc. in Mathematical Physics at the University of Waterloo. He is currently studying Astrophysics at the University of Waterloo, and he plans to see where he is led in his learning, likely to continue on to a Ph.D. In the months since this conference, Andrew has stepped forward to be the local CSCA contact for our Waterloo Local Chapter.

Today marks two years since our May 2018 conference, “From Sea to Sea … to Sky! Science and Christianity in Canada.” Pictured here are Arnold Sikkema from our Vancouver chapter and James Drummond of our Nova Scotia one! Our conference recordings are also available today, which may be accessed at www.asa3.org/ASA/resources/index.html (CSCA 2018 button at bottom). We’ve released select video recordings as well at www.csca.ca/YouTube #cscaVan #cscaNov #c2c2sky ... See MoreSee Less

On Friday we held our first ever online-only local chapter event! The recording of "Technology: Progress or Prudence?" with Isaiah Ritzmann is available on our YouTube channel here: youtu.be/vOmgsZ59E6M ... See MoreSee Less