On the subject of science and faith, the stars literally aligned for me this past July. Early in that month I gave talks to two different age groups on the topic, at the national Presbyterian Youth Conference at Brock University (Canada Youth 2014). Two weeks later at McMaster University, just down the highway, was the joint annual meeting of the American Scientific Affiliation, the Canadian Scientific & Christian Affiliation, and, from Great Britain, Christians in Science. Bethany Sollereder on the previous blog entry has shared some reflections on that meeting.

I was asked to do an article for the Presbyterian Record covering both events, and it was an interesting juxtaposition. As reflected at both meetings, I have found resolving the issues concerning science and Christianity to be a gospel imperative. Many recent surveys (by organizations such as Reddit, The Barna Group, the Hartford Institute for Religion Research etc.), are showing that an overwhelming reason why people, and young people specifically, are deserting the church is the perceived inconsistency between modern science and the teachings of Christianity. I had thought this not to be a necessarily Canadian condition, until discovering at the end of my youth talks, the most common comment was, “I am relieved I can study science and keep my faith.” 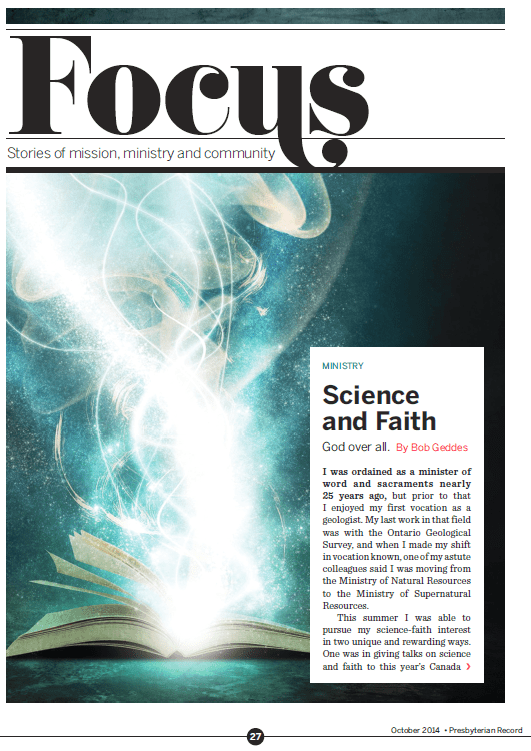 Relieved? It should be “excited”! As upheld by my interactions with the scientists who attended the McMaster meeting, there is very little to compare with God’s immeasurable love for humanity, when we use the biblical premise from Psalm 103:11: “For as the heavens are high above the earth, so great is God’s steadfast love toward those who fear him.” The more we invest in scientific discovery, the greater we discover how much God loves us, and the more significant becomes what God did for us in the sacrifice and resurrection of Jesus Christ, on our behalf.

Science and Christianity are a good fit. Science and evangelism are equally a good fit. In my own faith tradition, this connects with evangelical clergy of the mid 1800s who were fascinated by the ancient age of the earth itself. Many faith based astronomers had felt a similar awe for a couple of centuries already. This is a tradition we can faithfully share and uphold, and I am thankful for organizations such as the CSCA, who help lead the way.

Bob Geddes serves on the executive council of CSCA as our Secretary/Treasurer.