The Canadian Association of Physicists (CAP) and the Canadian Organization of Medical Physicists (COMP) are pleased to announce that the 2013 CAP-COMP Peter Kirkby Memorial Medal for Outstanding Service to Canadian Physics is awarded to David Chettle, McMaster University, for his dedicated service to the Canadian physics community which has strengthened and raised the profile of physics as a profession. He has enthusiastically mentored a generation of medical, health and radiation physics students and has made physics an attractive career option for many. His development, maintenance and expansion of vital multi-disciplinary programs and infrastructure raised the profile of Canadian physics internationally; he played a key role in the DMBP; and his leadership has led to active participation by many in the physics community. 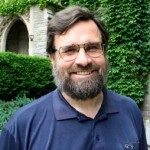 Dr. David Chettle has dedicated 20 years to advancing Canadian physics. He is receiving the Kirkby Memorial Medal in recognition of his tireless service to the Canadian physics community, and his role in enhancing the profession and making physics an attractive career option. David has nurtured and overseen a number of programs at McMaster University, including undergraduate and graduate programs in medical and health physics. He forged new links between Mohawk College and McMaster University to provide a professional program in Medical Radiation Sciences and pioneered the McMaster Institute for Applied Radiation Sciences, facilitating new collaborations between scientists, engineers, and representatives of industry and government. In serving as Director of the McMaster Accelerator Laboratory and as Director Academic Operations of the McMaster Nuclear Reactor, David has helped maintain and expand physics research infrastructure in Canada. Under David’s influence, the generation of physics students that he has trained and mentored have gone on to become active members of the physics community. David himself is a long-time member of both the Canadian Association of Physicists (CAP) and the Canadian Organization of Medical Physicists (COMP). In the late 1990’s, David was a key figure in restarting the CAP Division of Medical and Biological Physics (DMBP), and served a two-year term as Chair of the Division. David has been a leader in showing the benefits of multi-disciplinary collaboration, in the fields of medical physics, health physics, radiation biology and dosimetry. In the process, he has greatly enhanced the physics profession and has made physics an attractive career choice for many. Former students are in high demand from employers in a diverse range of fields, including the health care system, the energy sector, industry, and academia. Dr. Chettle’s integrity, ethical behavior and infectious enthusiasm for physics has had a broad and lasting impact, and as such he is a deserving recipient of the Peter Kirkby Memorial Medal.